May Morgan Robinson distinguished woman, Westchester and National Civil Rights Advocate, was born in New York City on May 6, 1904. When she was just one month old the family moved to Yonkers, New York where her father, the Late John Alexander Morgan MD, established his medical practice. Yonkers would become her beloved home for more than eight decades.
May was a product of the Yonkers Public Schools. As the child of parents who valued and were committed to education as evidenced by their own achievement, she was expected to pursue higher education. She did so at Howard University in Washington DC where she earned a Bachelor of Science Degree in Social Work. Later, she pursued graduate studies in Special Education at Hunter College in New York City. These educational choices hinted at the direction of her life’s work.
Indeed, her career as activist begun as a teenager when she became active in voter registration. Therefore, it was no coincidence that in 1974, the National Urban League appointed her Head of Voter Registration in Yonkers. Collaborating with like minded social justice enthusiasts May co- founded the First Black Democratic Club in Yonkers, The Nepperham Community Center, which took root in her home, and The Westchester Citizens for Justice to name a few.
Acutely aware of blatant Yonkers police brutality against Blacks, the housing discriminatory practices and the under employment of Blacks, May initiated and conducted an extensive survey that documented what was widely known and experienced in her community. This produced undeniable evidence that forced the politicians to take notice.
Indeed May Morgan took the issues of injustice to the highest levels of County and State governments. In 1952 as Chair of a newly formed “Westchester Citizens for Justice” she corresponded and sought audience with Herbert C. Gerlach, County Executive, Honorable Thomas E. Dewey, Governor of the State of New York and his Counselor, Hon. George Shapiro requesting an investigation into the killings of Yonkers residents, Thomas Wilson, Oliver Phillips, James Blacknall and Wyatt Blacknall. She contended that these killing were the result of police brutality. This paragraph excerpted from one of her letters to the Governor in 1952 demonstrates her pragmatism….
“ Perhaps more important than the Labinsky Case itself is the widespread feeling that it stands against a background of prejudice and discrimination, intimidation and violence which seems to constitute a growing pattern in the County of Westchester. This development of racial tension has been highlighted recently not only by the Peekskill riots but by the subsequent, unpunished slayings of four Negroes other than the Blacknall brothers in question. We believe that by virtue of our proximity to the situation we are in a position to offer you concrete evidence of its alarmingly serious nature and to present also suggestions for its alleviation which your office may find possible to put into effect.”
The determination and benevolence of this civil rights advocate was readily visibly in a number of the stances she took. In an era when organizations of color were denied access to the media, May’s home became the studio from which the NAACP launched a Press Conference in support of a 28 year old former prostitute, whom they felt was framed by police and charged with the stabbing death of a man from Hastings on Hudson. To draw attention to the plight of 40 families, left homeless by fire, she joined a “Sit In” at Yonkers City Hall and was arrested. Undaunted by the experience, she protested the War in Vietnam, organizing to transport 10 buses filled with supporters to join the March on Washington DC. She would later become the first Black Delegate from the 25th Congressional District to attend the National Democratic Convention anti Vietnam War Movement.
May Morgan Robinson was also a devoted mother nurturing and educating her beloved twin daughters Joanne and Roberta. Although they were her priority her love for humanity allowed her to cultivate, support and improve the lives of many, particularly youth. Her home became a safe haven for young unwed mothers whom she fostered imparting life skills, social skills and parenting skills which she modeled.
To show case their talents and expose youth to a wider audience, May organized and chaperoned members of the Yonkers Service Club to entertain in Army Bases including West Point. As a champion of integration, she often arranged for integrated groups of women to perform in similar venues.
As one might imagine, the contributions of May Morgan Robinson did not go unnoticed. She was a member of many local and National organizations which honored and recognized her in a variety of ways.
Biography by Gwen Cort, AWAH

Portrait of May Morgan Robinson 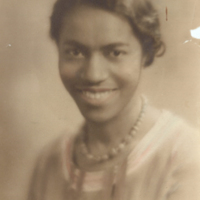 Undated [Handcolored?] Black and White photograph of May Morgan Robinson

Group photo of May Morgan Robinson with unidentified individuals 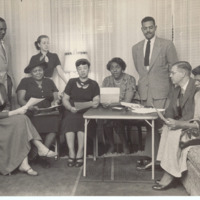 Undated black and white group photo of May Morgan Robinson with unidentified individuals.

May Morgan Robinson and unidentified group in front of charter bus. 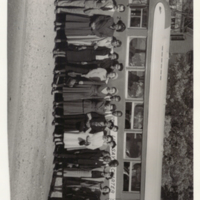 Undated black and white photo of May Morgan Robinson and unidentified individuals in front of a charter bus.
View all 3 items